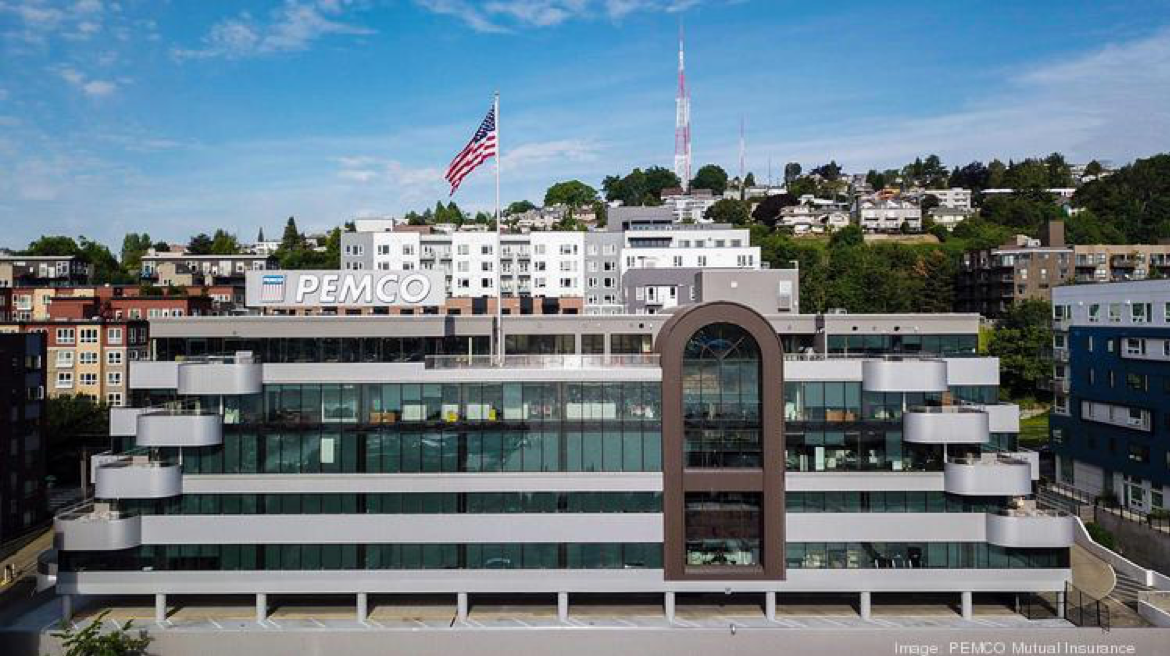 “Once again, another sign that a number of companies are downsizing their office space as work from home and shared space becomes more “permanent”……”

In a news release, Pemco said it also put on the market three adjacent properties east of the headquarters building.

“Over the last two-plus years, the pandemic taught us how to efficiently conduct business in a new and different way that continues to meet and exceed our customers’ needs,” President and CEO Stan McNaughton said. “Simply put, we have more space than we need in today’s business environment.”

The company listed the property with Cushman & Wakefield.

The company is financially stable, McNaughton said in the release, which added the decision to list is “one the company thoughtfully considered as it successfully evolved to support a remote and hybrid workforce.”

The decision also considers Pemco’s accountability as a mutual insurance company, which is driven in part by its fiscal responsibility to act in the best interest of its owner-members. He added Pemco has no plans to leave the Pacific Northwest where it’s been since its 1949 founding.

Pemco (Public Employees Mutual Insurance Co.) is still evaluating what size and type of headquarters is needed for its hybrid work model and where it should be located. What is clear now, McNaughton said, is the direction Pemco is heading.

“We’re leaning into the future, evolving as a company by focusing on ‘how’ we do business, not ‘where.’ For us, that means continuing to embrace cloud-based technology and supporting our hybrid work.”

A lot has changed since 2015, when Pemco acquired the property at 1300 Dexter Ave. N. At the the time, a Pemco spokesperson said it hoped to make the building its home for the next 20 to 30 years.

Public records indicate the company bought the 1980s-era building for nearly $31.6 million, and moved in after extensive renovations to the nearly 81,700-square-foot building. At the time Pemco had 350 headquarters employees.

In late 2019, public records show Pemco paid nearly $17.4 million for two of the parcels east of the headquarters. Pemco on Thursday said one parcel, at 1231 Westlake Ave. N., was formerly leased by National Sign Corp. The 102-year-old building is nearly 27,150 square feet.

The three parcels total just under three-quarters of an acre.